The Grandvalira ski resort is the largest skiable domain in the Pyrenees, beginning at Pas de la Casa located right on the border with France, and stretching over six towns/villages to Encamp, close to the capital of Andorra la Vella.

Some of the highlights of Grandvalira include:

If you’re looking for the best ski resort in Andorra then many would argue the case for one of the villages in Grandvalira.  The two main villages/towns, from a UK holidaymaker point of view, are Soldeu and Pas de la Casa, and whilst geographically close they are very different choices.

Soldeu is in the heart of the ski area and boasts some great hotels, such as the 5* luxury Hotel Sport Hermitage & Spa, which is all-suite accommodation with stunning mountain views, and the fully renovated Park Piolets just on the edge of the village.  Apres ski in Soldeu is good fun and family friendly, with quite a few options for live music too.

If you’re looking for somewhere more lively then take a look at Pas de la Casa, at the French end of Grandvalira.  Home to a large number of shops, bars and restaurants due to the duty-free arrangements in Andorra, Pas de la Casa attracts lots of day-trippers from France as well as those staying for longer breaks to enjoy the skiing and snowboarding.

Toulouse is the closest airport to Grandvalira ski resort, and has three shared airport transfers per day to each of the sectors, however Barcelona still proves to be the most popular choice for ski holidays to Grandvalira because of the huge choice of flights as well as there being seven shared transfers daily. 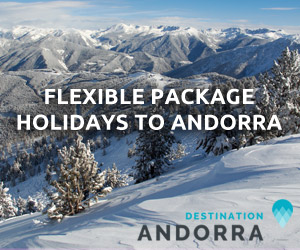